Researchers measured the entire dispersion spectrum of superfluid helium to explain discrepancies in previous studies and to narrow theories of superfluidity.

At low temperatures, helium is the ultimate quantum fluid, or “superfluid”, exhibiting behavior that is dominated by quantum mechanical fluctuations. These fluctuations create a menagerie of effects that can be both entertaining (a cup of liquid helium can deflate itself) and potentially problematic (“superleaks” can interfere with low-temperature experiments). Understanding and predicting such behaviors has been an active field of research since it was first observed in the 1930s [1, 2] . Now, Henri Godfin of the University of Grenoble Alpes, France, and colleagues have carried out a new study on the stimuli of superfluid helium, which highlights important limitations that could support or exclude certain theoretical models of superfluidity [3] . The result is an experimental oneTour de Force, whereby the superfluid dispersion relationship is established with an unprecedented precision.

The dispersion relation of a material describes how the material reacts to a disturbance. For example, when a sound wave (or a phonon) propagates in a material, the dispersion relation defines the relationship between the energy and momentum of the phonon. This relationship is linear for small impulses, and the slope of the line indicates the speed of sound in the material. In a conventional fluid, sound waves are strongly attenuated, and this linear regime therefore represents the complete dispersion spectrum: At higher interference energies, the phonons cannot be kept coherent and the excitation dies.

In superfluid helium, the dispersion relationship is more complicated: the excitation spectrum shows an unusual dip before it disappears (Fig. 1). Although the exact origin of this dip is still debated, its source is likely the same that causes the peculiar superfluid behavior that amuses and confuses experimentalists: helium-4, which makes up more than 99% of helium atoms, is a boson made up of two Protons and two neutrons. In a bosonic liquid, several particles can assume a certain quantum state. When liquid helium is cooled below its superfluid transition temperature (2.2 K), a significant part of the helium-4 atoms condenses into the same quantum state with the lowest energy, creating a macroscopic quantum state in which all particles involved move together.

The result of this coherence is a zero viscosity fluid that can withstand excitations beyond the simple longitudinal phonons seen in a normal fluid. Within the anomalous low-energy collapse in the dispersion relation, these excitations are called rotons. Like phonons, rotons are the quantized manifestations of sound waves. But while phonons only vibrate lengthways, rotons are more complex and carry a certain vorticity – in a model they resemble a smoke ring. Many scientists have considered the problem of the roton minimum in dispersion, starting with Lev Landau [4] who received the Nobel Prize in 1962 for his theory of the connection with sound waves. Despite the attention that has been paid to this problem, our understanding of the spectral property is still incomplete. One reason for this knowledge gap is that the dispersion relation of superfluid helium has so far only been partially characterized.

Neutron scattering has been the primary technique for measuring dispersion relationships, although other methods – particularly those that measure the propagation of ultrasonic pulses – have helped characterize limited parts of the spectrum. These experiments identified qualitative features of the spectrum, but the different data do not always agree [5] . Godfrin and his colleagues have now made these earlier studies understandable with careful measurements of the inelastic neutron scattering of the excitation spectrum over the entire energy and momentum range. They carried out these measurements at various temperatures and pressures up to 24 bar.

This wide range of parameters enabled them to extensively study the properties of the superfluid, including behavioral changes near the superfluid’s freezing point. What is important is that the researchers outlined in detail the methods they used to test the data, which should be helpful in future studies of similar systems. Taking into account all potential sources of error – both in their own and in previous experiments – they explained discrepancies between different measurement techniques and compared their work with previous studies. The result is the most complete and accurate measured dispersion relation for superfluid helium to date.

Since the excitations of a material determine its thermodynamic properties, knowledge of the complete dispersion relationship enables the calculation of properties such as heat capacity and particle density. Before the new measurements, such calculations were based on an accepted parameterization derived from conflicting data sets. With more reliable information about the dispersion ratio as a function of temperature and pressure, these properties can now be determined with greater certainty. Godfrin and his colleagues have already made progress in this regard and have found a good match between the empirically determined value for the heat capacity of superfluid helium and the value calculated analytically and numerically from their measured dispersion relation.

Improving experimental precision for a given problem has often led to dramatic advances in other areas as it improves researchers’ ability to validate basic models. As the simplest bosonic liquid, superfluid helium provides an ideal system that could aid in developing theories about rotons. Models favored by new data can be applied to other systems that support roton-like excitations, including ultracold bosonic gases, where dimensionality is severely limited. The study by Godfrin and colleagues provides a clear benchmark for such a theoretic sifting that I expect will greatly improve our understanding.

Elizabeth Blackburn is Professor of Physics at Lund University, Sweden. She is a condensed matter physicist whose research interests are largely in the area of ​​strongly correlated material systems. Her current work focuses on low-dimensional magnetic materials and superconductors. 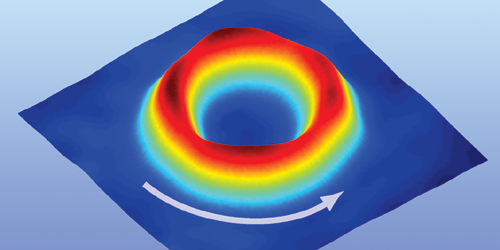