New calculations show that rotating black holes – in contrast to non-rotating ones – can be tide-deformed by an asymmetrical gravitational field.

Could a black hole have tides? The general view was no, these dense objects are too rigid to create such surface deformations. But a new theoretical calculation shows that a rotating black hole can develop a tidal curvature in a non-axisymmetric gravitational field [1] . Alexandre Le Tiec from the Paris Observatory and Marc Casals from the Brazilian Center for Physics Research show that these conditions could arise when a black hole merges and that the bulge should affect the spin of the black hole.

The earth changes shape under the influence of the moon and sun. The “Tidal Love Numbers” (TLNs), named after the mathematician Augustus Love, are characteristic of this deformability. Different TLNs describe different modes of tidal response. For example, Earth’s quadrupolar TLN has a value of 0.3, while the same parameter for a (less deformable) neutron star is estimated to be around 0.1.

Previous work has shown that the TLNs for a non-rotating black hole in a static tidal field are zero. The situation is different if the field changes over time or if the black hole rotates in an asymmetrical field. Le Tiec and Casals found that a black hole spinning at 10% of its maximum speed in an asymmetric field should have a quadrupolar TLN of 0.002. Although relatively small, such tidal deformations could affect the dynamics of black hole merging. In the case of a stellar mass black hole spiraling into a spinning supermassive black hole, they found that tidal bulges on the larger object create torque that slows the rotation.

The combination of gravitational wave and X-ray observations of neutron stars provides new insights into the structure of these stars as well as a new confirmation of Einstein’s theory of gravity. Continue reading “ 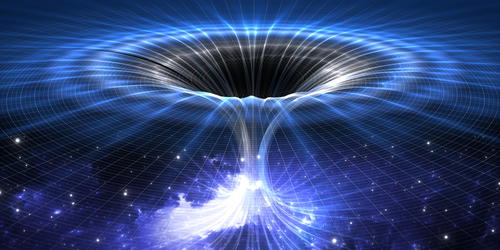 When the disorder is just right