HeLa cells, named after their original donor Henrietta Lacks, represent the most widespread human cell line in the field of biological research. The cervical cells of a dying woman were kept alive in 1951 (without consent) as “immortal” cells and led to research for polio vaccination and isolation of the human immunodeficiency virus. They are still used today. Ethical issues behind tissue removal for research purposes have only recently been addressed. Today, no doctor is allowed to take or use tissue biopsies without the owner’s full consent. 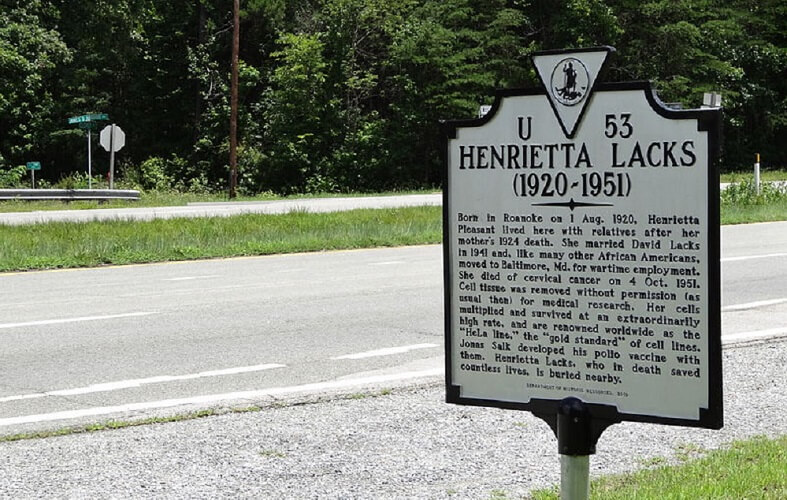 What are HeLa cells?

HeLa cells are cell lines, animal cell cultures, which are removed from living tissue during a biopsy and reproduced ex vivo. HeLa cells are immortal cancer cells – they do not die, but keep dividing when they are supplied with nutrients. The primary HeLa cell culture – tissue from Henrietta Lacks’ uterus that was removed without her permission when she was treated for cervical cancer in early 1951 – is still alive today. These are the daughter cells of the original cells taken from her womb.

If healthy cells had been removed in Henrietta’s biopsy, they would eventually have experienced controlled cell death. Our cells are programmed to how long they live. However, cancer cells are mutated cells that no longer respond to the regulation of the cell cycle. They divide continuously. HeLa cells were the first immortal cell lines and have helped us find cures and treatments for many diseases.

Why are HeLa cells immortal?

HeLa cells represent an immortalized cell line. Since the definition of a cancer cell is a cell that does not die but continues to divide due to mutations in its DNA, only cancer cells provide scientists with immortal cell lines. The HeLa cell definition is therefore a long series of cancer cells that grow outside the body (in a laboratory) and come from tissue by Henrietta Lacks.

With the advances in genetic engineering, geneticists are now able to create their own continuous cell lines. By manipulating the genes that control cell death (apoptosis) and mitotic division, scientists can produce immortal cell lines from healthy cells. Researchers have already developed a number of near-immortal stem cells (BEL-A cells) that, when activated, produce red blood cells. These can potentially replace the need to donate blood – especially for rare blood groups. The implementation of this technology in mass production is not yet possible. In addition, this is an artificial, continuous, but not immortal, line. BEL-A cells eventually die.

How a cancer cell attains immortality is still the subject of further research. It appears that the telomeres of the chromosomes responsible for cell division and death are elongating. In a healthy cell, the telomeres shorten slightly with each cell division. As soon as they have reached a certain size, their other function as central DNA sequence protection is lost. This can damage the DNA so badly that the cell is either removed from the body’s own immune cells or forced to self-destruct.

Cancer cells and HeLa cells reverse this process. Rather than shortening itself over time, an immortal cell contributes to its telomere every time it divides. This may be because the gene for telomerase production and activity remains switched on – the TERT and TERC genes are expressed in a mutated cancer cell. This occurs very rarely and only for short periods of time in normal cells.

Telomeres are the equivalent of hard hats that protect our DNA. At the ends of each tightly coiled strand of double helix DNA that make up individual chromosomes are the telomeres. Telomeres form the ends of the arms (short and long) of the chromosome.

A telomere is a repeated non-coding sequence of DNA. To this day, we know that its function is to protect the DNA that is deeper in the chromosome. Telomeres bear the brunt of attack from reactive oxygen species (ROS).

The longer the telomere, the longer the natural life of the cell. As we age, the telomeres in our cells shorten. Some tissues age faster than others, such as cells in the female reproductive tract. Long life can be hereditary – long telomeres can also be the result of our inherited genes.

Telomeres shorten when a cell divides. A cell that divides often dies faster than a cell that divides slowly. Mitosis requires DNA replication and every time this occurs a telomere sequence is removed. Any damaged sequences within the exposed telomere are also removed.

Telomerase is an enzyme that repairs the telomere on a chromosome. This slows down the process of telomeres shortening as damaged sequences are repaired, not removed. However, the telomerase gene must be expressed before it can be produced.

Telomerase expression in the amounts necessary to elongate the telomeres occurs only in male germ cells (early sperm cell types), stem cells, blastocysts, and cancer cells. Other cells do not express telomerase at these high levels and are therefore prone to aging and eventual death.

Telomerase is made up of a protein enzyme called telomerase reverse transcriptase (TERT) and a fragment of RNA. The RNA component (TERC) provides the template which the penzyme follows to construct another telomeric sequence.

The HeLa cell line does not have the longest telomeres of cancer cells. Those on the U2OS line, taken from a fifteen-year-old girl who died of osteosarcoma in the 1960s, are much longer. The telomere lengths in normal cells are also relatively long; However, it reduces the time.

In HeLa cell cancer research, scientists were initially asked to immortalize non-cancerous cells. This has helped us understand the mechanisms – like the TERT gene mutation – that cause cancer cells to grow. Once the basics of cancer gene variants are understood and we know more about each of the mechanisms involved, the next step is to let immortal cells die.

So far, killing immortal cells also means killing healthy cells. Only high levels of toxin can do the job, such as: B. chemotherapy. Radiation exposure also kills cancer cells at risk of damage to DNA by healthy cells. The point is to find individual products for cancer gene variants that only act on the mutations that affect cell life and uncontrolled division. We still have a long way to go.

The HeLa cell line has been used in tens of thousands of studies, some more important than others. Cells have even been sent into space to study the effects of weightlessness. HeLa cells, used for cosmetic ingredient testing, have helped generate huge profits for cosmetic companies. More importantly, they’re still used to study the results of different genetic variants of our DNA, treat viruses, develop and test new drugs to understand how COVID-19 infects human cells, and to help us one Bringing healing from cancer closer.

HeLa cells compared to normal cells have the following abnormalities:

Henrietta Lacks was a poor African American woman who lived at a time of severe racial inequality. When she could no longer ignore her stomach ache, she had to travel to find a doctor who was ready to diagnose and treat it. That doctor was Dr. Howard Jones. To stage her cancer, he performed a biopsy.

Without their knowledge, however, some of this tissue was revealed to a cancer researcher named Dr. George Gey passed. At the time, cells growing out of the body was a hit-and-miss problem. Gey found that Henrietta’s cancer cells were multiplying outside the womb at a rate no one had seen before. Gey was still growing her cells in the laboratory a few months later after her death. She was thirty-one years old.

Henrietta’s children, grandchildren, and great-grandchildren not only knew nothing about it, they also failed to realize that Henrietta’s genome had been sequenced and published. It wasn’t until 2013 that the National Institute of Health agreed to only release Henrietta’s genome sequence on an application basis. Those who receive a permit are required to enclose a confirmation of their family’s consent. At the same time it was decided that naturally occurring genes cannot be registered as patents. Although companies using HeLa cells in their research have benefited from the results, no member of Henrietta Lacks’ family has received financial compensation.

HeLa cells represent two major advances in scientific research. The building of cell lines that will help fight diseases that ended Henrietta’s life and the change in law that gives every US (or European) citizen full rights to their body from tissue to cell.