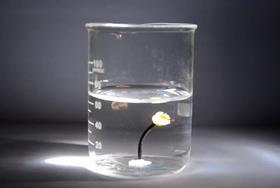 Scientists have developed a photosensitive hydrogel that can orient itself towards a light source. The hydrogel mimics the phototropism in plants and has been used to maximize the energy harvesting ability of a photocatalyst.

Phototropism allows plants and other organisms to adapt to changing light conditions and maximize energy production throughout the day. However, artificial photocatalytic systems typically require direct irradiation from a light source. There are only a few examples of scientists who achieve an artificial phototropism that is independent of an external control and automatically follows the direction of light.

A team led by Feili Lai from KU Leuven in Belgium and Tinaxi Liu from Jiangnan University in China has now developed a system that combines artificial phototropism with photocatalytic hydrogen peroxide production. Modeled after a sunflower, the system contains two poly (No-Isopropylacrylamide) -based hydrogels. A hydrogel is temperature sensitive and forms a stem. It also contains reduced graphene oxide (rGO) to help absorb light. On top of the stem sits the second hydrogel, which imitates a flower head. It contains a photocatalyst for the production of hydrogen peroxide, which consists of a composite of cadmium sulfide and reduced graphene oxide.

When light shines on the stem, it bends and tracks the light source. This aligns the flower disk with the light to maximize light absorption so that it can maintain a high photocatalytic efficiency regardless of exposure to light.

The team compared their hydrogen peroxide yield with a system without phototropism and found that, while the yield of the photosensitive system remained constant, the yield of the control decreased with increasing angle of incidence from 0 ° to 90 °.