NASA announced on June 2nd that it would be sending two missions to the planet of the greenhouse. Once again, NASA-made robots will see the skies of Venus for the first time since the Magellar Orbiter mission, which ended in 1994. These missions come after a renewed interest in Venus due to the hotly debated phosphine controversy, which, if true, could be a biosignature. The two missions were selected as part of the Discovery program after a competitive peer review with the other possible missions. The two lucky winners are DAVINCI + (Deep Atmosphere Venus Investigation of Noble gases, Chemistry, and Imaging) and VERITAS (Venus Emissivity, Radio Science, InSAR, Topography, and Spectroscopy). 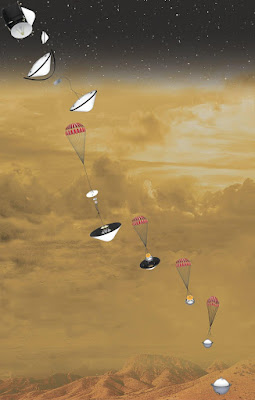 DAVINCI +, led by James Garvin of the Goddard Space Flight Center, will measure the composition of Venus’ atmosphere to understand how it was created (pictured). It would be the first US-led mission to study the atmosphere since 1978 and the first probe to study the atmosphere since the Soviet spacecraft Vega 1 and 2 in 1984. DAVINCI + will launch into the atmosphere and descend the gases during its composition and pass on isotopic composition. On its way to the surface, DAVINCI + will work to return high-resolution images of the “Tesserae”, a mysterious terrain on Venus that has puzzled geologists since Magellen. The second mission, VERITAS, led by Suzanne Smrekar of NASA’s Jet Propulsion Laboratory, will update and update the maps captured by Magellen. It will record the surface elevations above __ of the planet. Using a method known as synthetic aperture radar, the probe will be able to image the surface with an accuracy not previously available. With these new data, planetary scientists hope to be able to investigate whether or not Venus, like its neighbor, has plate tectonics. This study could also shed light on how plate tectonics began on our own planet. Venus’s hot atmosphere has allowed the crust to maintain hot temperatures similar to early Earth and could reveal how the crust ruptured and formed tectonic plates. VERTITAS will also begin mapping Venus in the infrared. In the infrared spectrum we will be able to differentiate between different types of rock and minerals. In addition, it will be able to detect volcanic activity when hot water vapor is released into the atmosphere. Each of the two missions received $ 500 million and will boost Venus science for the first time in 30 years. They are scheduled to hit the market in 2028-2030.