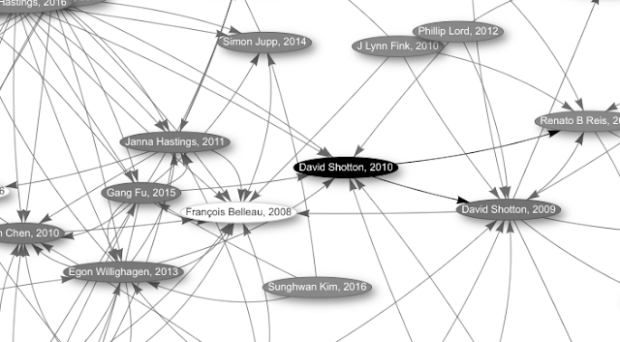 A high citation count is commonly called a Notice of impact. However, we often do not know why an article is being cited.

While it is reasonable to assume that most citations are supportive, sometimes articles are cited because they are controversial.

But not every positive quote is the same.

2012, Perroni and Shotten addressed this limitation the current citation practice through the development Citation ontology (CiTO).

For example, if an author used a method in an article they cited, they can add the annotation cito: usesMethodIn to be indicated as such in their reference list.

Perhaps an author disputes the results of a work, in which case he could also annotate his reference cito: does not agree.

But proposing a solution is not the same as solving the problem. And unfortunately the reception of ideas was limited.

While CiteULike Reference Manager had support, this service has since been decommissioned.

That is why the editors of the Journal of Cheminformatics developed a proposal Piloting a workflow that enables CiTO annotations for use in our journal (see also these author guidelines).

The aim is both to test the recording by the authors and to find out how this could work in practice.

While inline annotation is preferred, we realized it would be more complicated, so we decided to annotate only the reference list.

Since the start of the pilot project, an additional editorial and six magazine articles have adopted the approach.

Some authors added intent for many more citations than we expected, and the variety of CiTO annotations used is also much higher than the pilot study suggests.

We worked on downstream tools to use and share the information.

One of them is the combination of Wikidata and Scholia which saves and visualizes OpenCitations and PubMed citation data.

We have annotated the citations with the CiTO annotation, and the statistics page shows that on June 13th, results of CiTO annotations were found in Wikidata for 56 articles distributed across 24 different journals.

The Journal of Cheminformatics is only one possible source, but the only magazine. The typed citations refer to more than 250 articles in more than 100 different journals.

So far, over 300 citations have been annotated with over 370 types (there can be more than one intent to cite an article). With this downstream tool we can track the uptake: 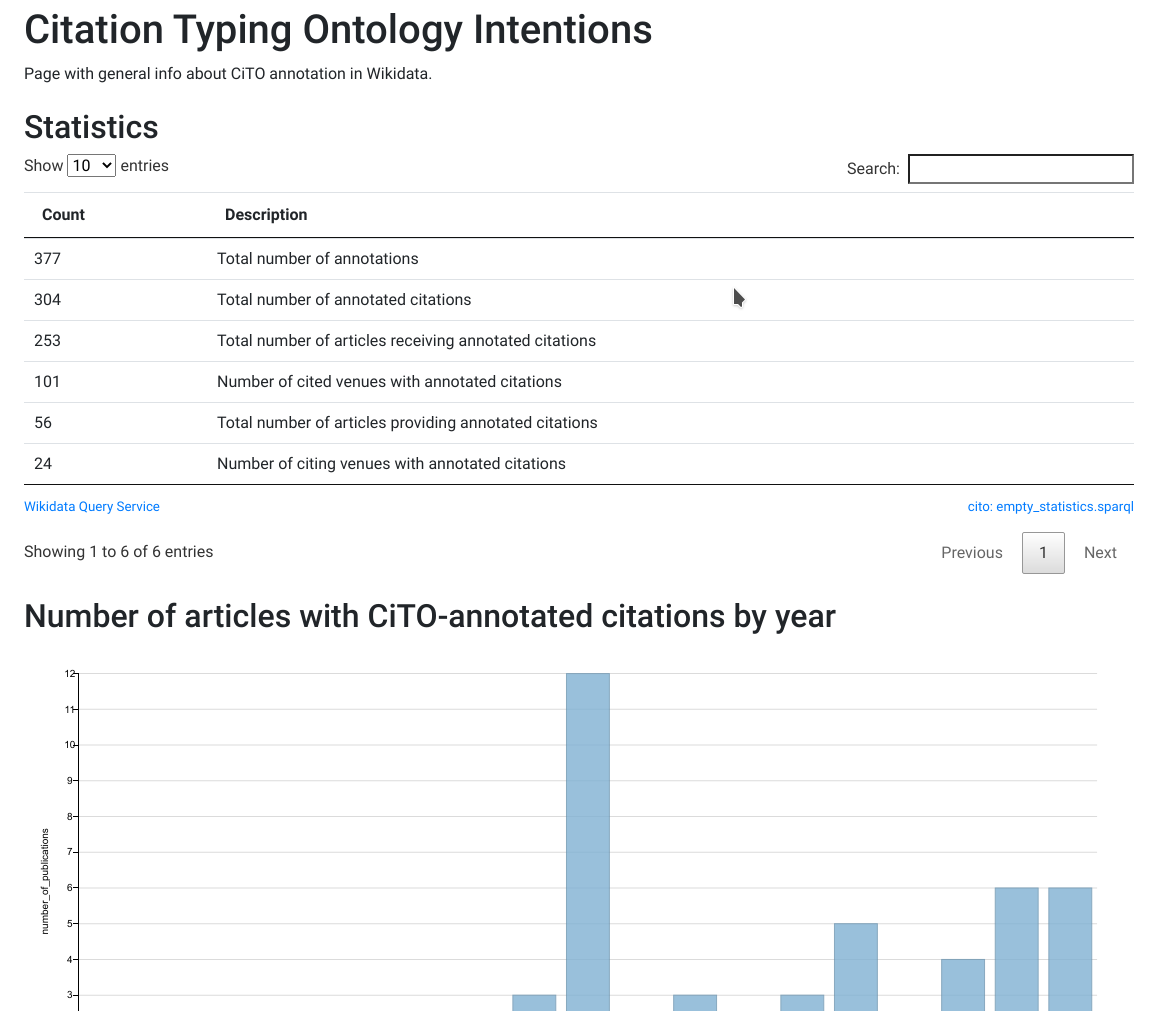 But various Scholia sites allow us to examine the results in more detail. For example, it shows us that in 2020 nine different citation intentions were used in Journal of Cheminformatics Item as visible in this Scholia figure: 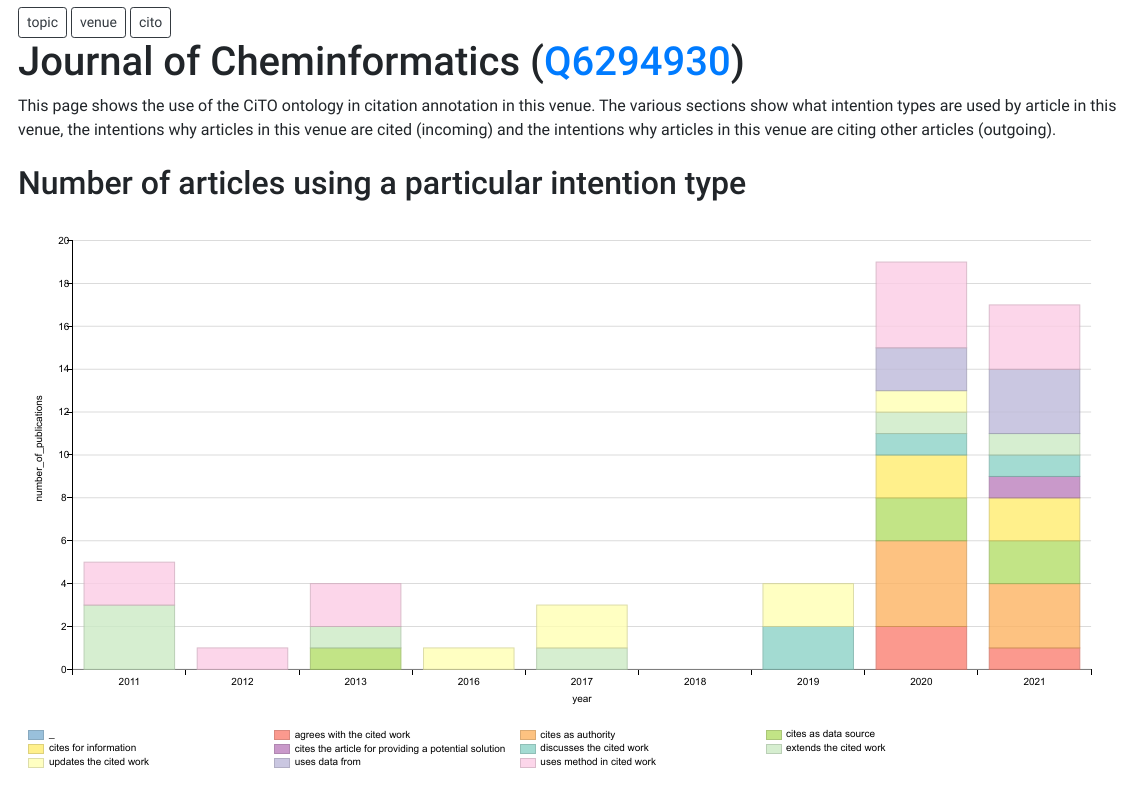 The current approach is somewhat limited. In the pilot articles, the CiTO tags are embedded as annotations in the reference list.

The downside of this approach is that if an article is cited multiple times in an article, the connection between the typification and the individual quotation is lost.

We want to be able to offer inline CiTO annotations, but this requires careful consideration and further development of the workflow.

Another problem is that adding the CiTO tags is a manual process for the authors as bibliography programs do not currently support their use.

To make life easier for writers, follow a Twitter discussion in spring 2021, we have developed a Markdown template with native CiTO support. Here the author only gives the CiTO type when citing the article.

The manuscript can then simply be saved as a Word file for submission to the journal. The Journal of Cheminformatics Template is available in our GitHub repository, and authors and editors should feel free to customize it to suit their own journal needs.

This summer we hope to have this template over. to be able to provide RStudio.

A limitation that is easier to handle is the automation of the extraction and dissemination of the citation typing data.

Currently this is still done manually, which obviously doesn’t scale too well. For this reason, too, we took the time to slowly start the pilot project and observe the problems that occurred.

But we are now very confident that the approach is ready for the next phase and we welcome other journals that are also considering taking on the pilot.

On a technical level, we will develop source code that can extract the CiTO typing information from the XML source (JATS format) of the BMC articles and automatically add this information to Wikidata.

The progress of the pilot project is very satisfactory and we are confident that the Journal of Cheminformatics is ready to translate this long-standing wish of the scientific community into modern publishing.

The pilot served as a proof-of-concept and showed that there is interest in the community to introduce this as a standard. There has been little acceptance so far, but we are satisfied with the way it went.

We know that there are constraints that need to be addressed in order to evolve this idea and allow it to spread smoothly and without disruption.

The further inclusion of this idea of ​​typified citation depends on the mutual willingness of journal editors, authors, publishers and indexing services.

We look forward to further involvement in the CiTO strategy and would be happy to advise interested parties on our experience with the pilot operation.

Magazine editors are strongly encouraged to contact the Journal of Cheminformatics about joining the pilot.

Thanks to the editors of Journal of Cheminformatics Editors for their valuable feedback on this post.